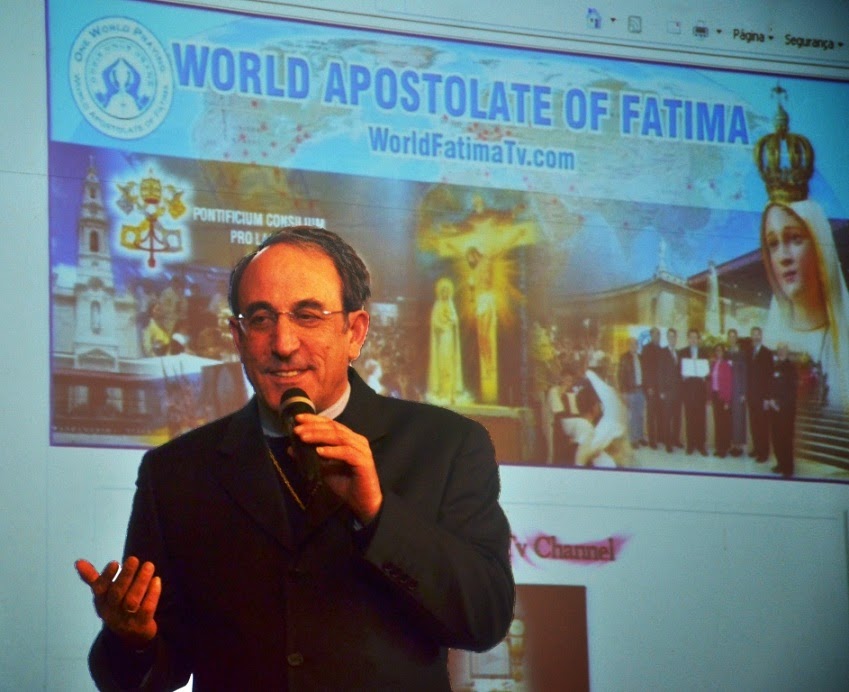 H. E. Mons. Antonio Marto, Bishop of Leiria – Fatima and Episcopal Moderator of the International World Apostolate of Fatima (WAF) is seen in the photo speaking after officially inaugurating the World Fatima TV Channel www.WorldFatimaTv.com with Prof. Americo Pablo Lopez-Ortiz, International President of the World Apostolate of Fatima. This was held during the International Conference “Fatima More Important Now than Ever,” held at Domus Pacis auditorium, Fatima, Portugal on 29th March 2011. Bishop Antonio had just concluded his talk on “Fatima for the XXI Century.” He gave his blessings in this public ceremony and was happy with the work and new developments of the WAF, seeing that the WAF is using technological advances as this one. 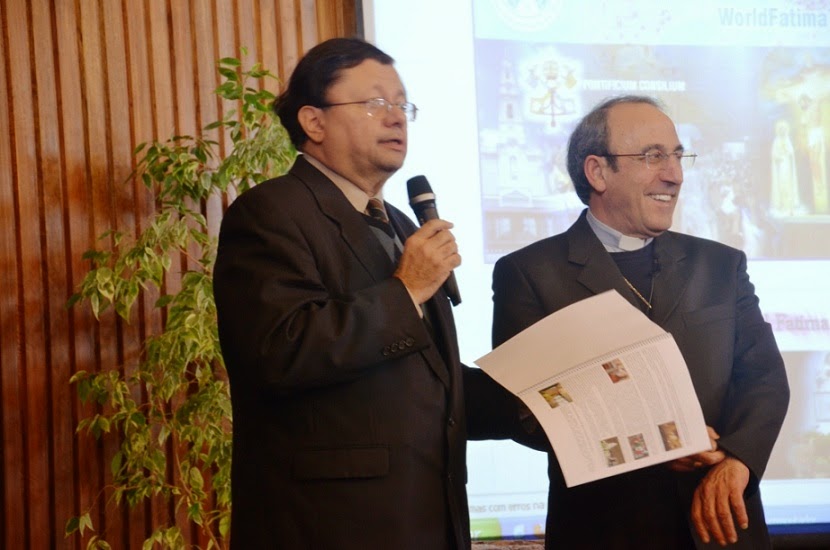 Professor Americo Pablo Lopez Ortiz earlier gave the inauguration message: “This effort of using the new technological avenues to serve the Good Lord and the New Evangelization through the authentic Message of Fatima is of the greater importance and we all should take advantage of it. We must always keep this tool to spread the Message and the Kingdom of God on earth in the highest possible esteem and use it in the most responsible way as to insure an ecclesial atmosphere coming from it where all travelers in the internet may find a place to "rest their souls" from the rushes of our daily lives. We must always keep the orthodox doctrine, away from "signs and wonders", always focusing on the four petitions of Our Lady of Fatima, our Pledge as model of spirituality and Eucharistic Adoration.”


Prof. López-Ortiz continued his inauguration address stating: “Nowadays, the media is expanding in all directions. As per the Holy Father’s advice, we are called to make maximum use of Internet to spread the saving Gospel of Jesus. The Mission of www.WorldFatimaTv.com.is to contribute to the New Evangelization of the world through the diffusion and living of the Fatima message, using "New Technologies.” Many businesses and companies are investing lots of money to sell their products. The WAF does not have that kind of money, but the Holy Spirit has provided us the free talents of our members to develop this. This website is similar to the Vatican one for Pope John Paul II's beatification. 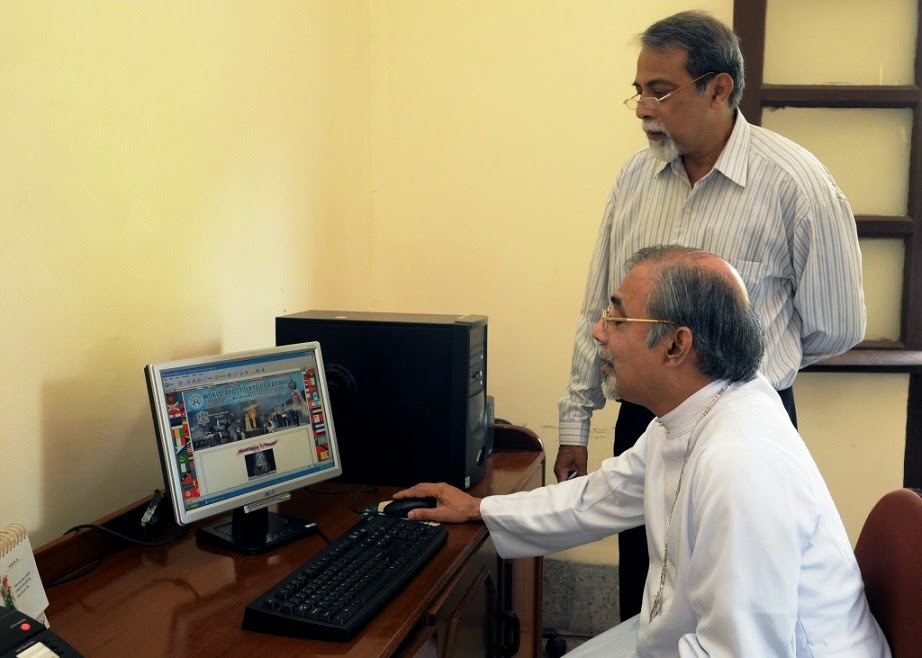 Over the next five years, the sum of all forms of video will exceed 91 per cent of global consumer traffic on the internet.   Internet video is slowly becoming a substitute for television. The advent of 3G/4G and WiMAX will make video available at the price of voice, while new technologies like cloud computing will become a viable means to deliver video (broadcast, catch-up, and video on demand) to a multitude of devices.

The International WAF, based in Fatima, in collaboration with the WAF-USA and the WAF-India inaugurated this TV internet channel operated from Goa, India by Dr. Celcio Dias, International Secretary of the WAF.

The World Apostolate of Fatima is an International Association of the Faithful of Pontifical Right, approved permanently by the Holy See on October 7, 2010. It is a movement of the Catholic Church , approved by the Holy See on October 7, 2005,  with millions of members around the world, who follow the requests made by the Blessed Virgin Mary to the three children of Fatima, in 1917: “Do not offend the Lord our God any more, because He is already too much offended”.


The message calls for daily meditation of the Rosary for world peace, prayers and sacrifices daily offered for the sinners and in reparation to the Eucharistic Jesus and the Immaculate Heart of Mary, through the devotion of the Five First Saturdays of the month. The members of the World Apostolate of Fatima use the Brown Scapular as sign of their personal consecration to God through the Immaculate Heart of Mary. Initially, it was only a Parish movement, born in 1947, in the USA, with the name Blue Army. Now, it is a worldwide movement present in more than one hundred countries. Its International Secretariat is located in Fatima, Portugal.

WAF members of any age group are warmly invited to collaborate. The easiest way to do so is to produce your own video and send it to us for International viewing. You are invited to film homilies, testimonies or religious events in your own Parish, or elsewhere of events, Power point slides, sermons recordings, talks, photos, etc.  Talk WAF to the world. WorldFatimaTv will also become your personal Tv Channel. Also, you are invited to integrate the videos published on WorldFatimaTv into your friends and relatives too.